Lines were wet right at first light for the early bite we hoped, not even 5 minutes after all the lines were set we hooked our first blue. This little 150 pounder gave us a hard time because of were he was hooked, in the belly, giving us no leverage or pulling power to lead it. 20 minutes of fight we got it in time to release it to swim away healthy.  Setting the lines back out after the release we hooked up again, this time the fish was hooked up right and showed us a little more size. after a 10 minute fight and a fantastic show close to the boat we estimated and released it at 450-500lbs. Back at the docks by 8:00 a.m. already with two tags. 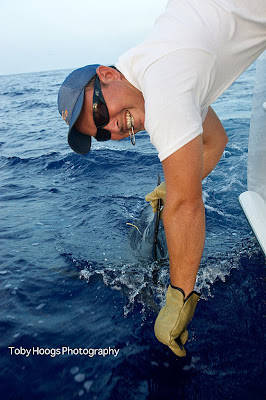 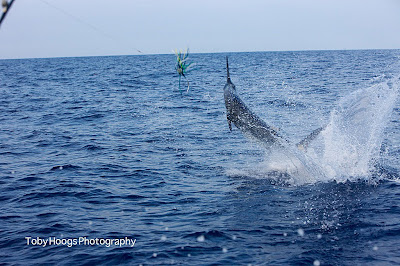 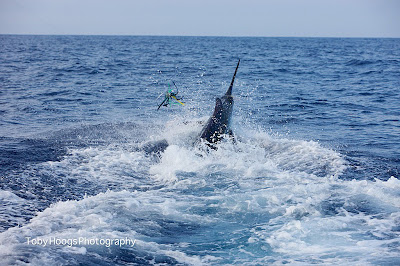 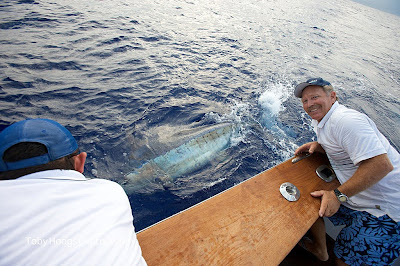 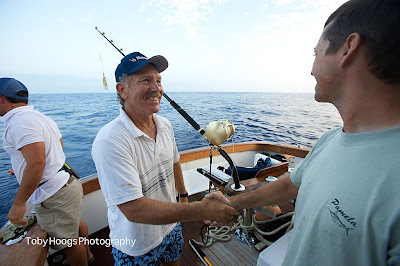 Posted by Bwana Sportfishing at 12:53 AM No comments:

Another good day of fishing, 10 minutes out of the harbor we already had 11 year old Austin Hoagland hooked up to his first marlin! We successfully released an estimated 80 pound striped marlin, starting the morning off with a bang. With some of the pressure of my shoulder as captain I knew I had two more fish to catch for younger brother Tristen (8yrs), and don't forget Dad who really wants a marlin too! Luckily, Mom was a happy camper just watching the boys have fun. An hour later we caught a barracuda for Tristen, which some what got him of the hook leaving me able to focus on Dads marlin. With the tide lowering most of the morning we predicted if we had any action it was going to be after the tide started rising around 11:00 a.m. The marlin had the same mind set, almost on the hour we had our first marlin hooked. After a aerial display the feisty little blue shook off the hook. That fish set the bite on for us, we went zero for four blue marlin bites leaving Josh and I pulling our hair out, not being able to get a hook in one. Mr. Hoagland was very understanding, and appreciated the experience of the hunt. We gave him some extra time trying for one more in hopes to not lose the next one. That extra time bought his youngest another chance at a real trophy pelagic. Young Tristen reeled in a Ono bigger then himself that made the smile on his face priceless.

Mr. Hoagland is already planning his trip back for another shot at his big blue.

Aloha, Capt. Teddy Hoogs
www.kilakilasportfishing.com
Posted by Bwana Sportfishing at 12:19 AM No comments:

Newly wed couple joined us on their honeymoon for a little excitement on the water. Fishing's been slow on the inside, so we wandered offshore looking for anymore floaters or possible action from Ahi feeding in porpoise schools. We found our self's 20 miles offshore and near a buoy due west of the harbor. Being that the buoy is so far offshore (28 miles), it doesn't get alot of pressure from most of the fleet. So we decided to check it out since we were close. We made one pass with the lures out and caught a couple 25 pound big eye tuna. Another pass caught us an Ono, another pass gave us a double hook up, one Ono and a 50 pound big eye. This went on for a couple hours giving our total for the afternoon, 8 Mahi Mahi, 3 Ono, and various size big eye tuna up to 50 pounds.
The newly weds were pretty excited with the action, giving that we caught his and hers first and largest fish together.

Aloha, Capt. Teddy Hoogs
Posted by Bwana Sportfishing at 12:05 AM No comments:

Another good day for Mahi Mahi, we came across another nice floater in an offshore current line. This time it was a scrap piece of cargo net, and without even trying to hard we caught 27 Mahi Mahi. Our family of six were thrilled with the action to top off their trip to the BIg Island.

The Huchteman family arrived at the dock @ 6:00 a.m., not knowing what to expect, and ready for a good time. We set out looking for action for the party of six and action was what we got. Just 20 minutes after the lines went in the water we came across half a pallet floating on the surface. With one pass by the floating object we got covered up with Mahi Mahi on just about every lure. We decided to stick around and take full advantage of the frenzy, and all the big smiles that followed. After an hour and a half we caught 41 Mahi Mahi, and created a few sore arms from all the reeling. The action slowed down a bit, so the Huchtemans wanted to try their luck with something bigger since the action part was out of the way.

No luck with the bigger fish, but still a great day fishing for this Missouri family.

Aloha, Capt. Teddy Hoogs
www.kilakilasportfishing.com
Posted by Bwana Sportfishing at 2:00 AM No comments: