Today it's my birthday, yes I chose to go fishing today. I rounded up my girlfriend Amy and a couple friends and we went fishing. The tide was a little later in the morning so we left around 8:30 a.m. We got a short-nose spearfish shortly after leaving to start the day off. Then we got Amy and our friend Shawna's first marlin. We went 3 for 6 on blues and ended the day with a nice 25 pound Ono for the grill that evening.
One of my better birthday's!
Aloha, Capt. Teddy Hoogs
www.kilakilasportfishing.com 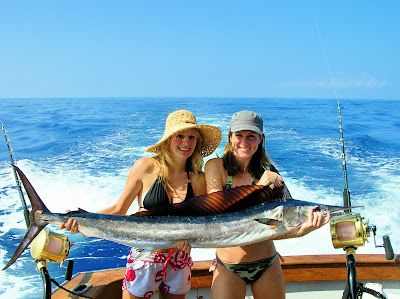 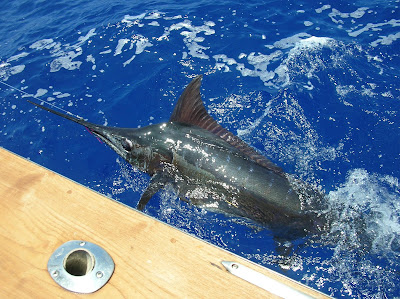 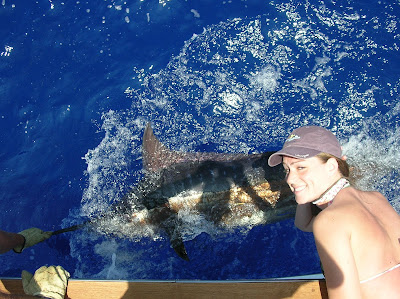 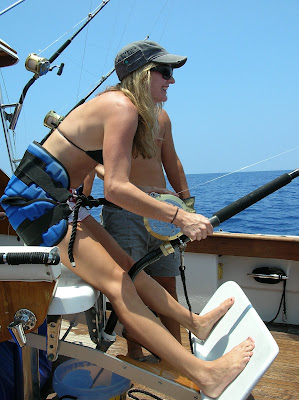 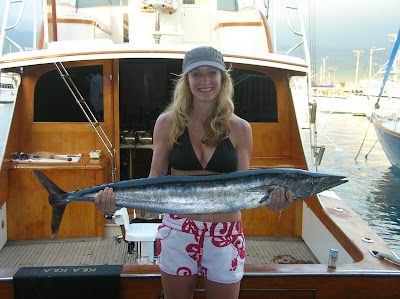 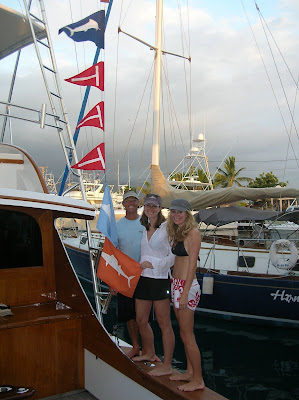 Posted by Bwana Sportfishing at 2:05 PM No comments:

Today we went to Otec buoy, the buoy was alive with life. Bait was foaming everywhere, we were marking some big Ahi and were seeing a couple marlin feeding. But nothing wanted to bite our hooks. Watching a couple Ahi get hooked and marlin around us we waited patiently for our turn. Just about when we were ready to leave a marlin took our short live bait. The fish ate it funny only to get lassoed in the process. A fish that's lassoed gives you no leverage as an angler, allowing the marlin to go where it pleases. Our young female angler did a great job to get the 200 pound blue to the boat in 20 minutes only to have the hook pull right at the back of the boat. Tough luck, but still fun for her to have the thrill of the fight.
We lost another blue on the way home outside the harbor.
Aloha, Capt. Teddy Hoogs
www.kilakilasportfishing.com
Posted by Bwana Sportfishing at 1:54 PM No comments:

This years Wahine tournament we decided to enter ourselves, our team included my girlfriend Amy and her friend Shawna. We hooked the winning marlin in the first hour, it looked to be every bit of 500 pounds but after a quick fight the hook pulled. We had a couple more strikes from marlin but couldn't stick em. The girls had a blast and are ready to do it again next year!
Aloha, Capt. Teddy Hoogs
www.kilakilasportfishing.com
Posted by Bwana Sportfishing at 1:47 PM No comments:

Another great day, fishing is really hot at the moment. Andrew went solo for his last day while the rest of the family choose to play some golf and relax. We left around 6:00 a.m. making our way to the North where we had good action yesterday. Fishing was still pretty hot but once again we were unlucky with our hook ups. We lost about 8 blues by 12:00 p.m. but we weren't giving up. We hooked a Short-nose spearfish, Andrew's first, the short-nose is one of the rarest billfish in the world so he was pretty stoked to get one under his belt.
After the Short-nose I decided to take a look at Otec buoy again this afternoon. Making our first pass with lures we hooked and released a small blue, getting our confidence back up that we still can hook em.
Otec looked pretty good, good enough to make me want to try live baiting to see if anymore marlin were there. Josh rigged a nice 2 pound skip jack and we towed it around up current of the buoy. I started seeing lots of marks on the recorder that looked like big yellow fin tuna and shortly after the bait went off! Andrew angled a nice 130 pound Ahi, and we quickly tried for another bait. We then proceeded to catch three more in the next hour before we ran out of ice and space. The biggest one weighed in at 182 pounds. We also caught a Mahi Mahi around the buoy to round off the day with a mixed bag of trophy fish.
The rest of the gang met us when we got in to see the good catch, all of them wished they went fishing instead of golfing. But they plan on coming back soon to play some more with us!
Aloha, Capt. Teddy Hoogs
www.kilakilasportfishing.com
Posted by Bwana Sportfishing at 1:59 AM No comments:

Mike Mcloed enjoyed the other day so much with his son and brother in-law, he wanted to show his wife and daughter how much fun they really were having in Kona. We mixed it up a little with the wife on board giving them a little snorkel in Kealakekua bay before targeting the blue marlin action.
After the swim we quickly set the lures out for the morning tide change in hopes to see one. We had the lures in just a few minutes when the short bait starting peeling out line. All we saw was a hole in the water where the lure used to be and a decent size shape. It quickly pulled hook before we really got to see it. I estimated it to be around 500 pounds. We were all wishing we got to see more of it when it came up for another look at the short rigger. Now I got to see it pretty well and it looked every bit of 800 pounds. It just knocked the lure out of the rigger and that was the end of her. I made a circle around in hopes to raise it again but this time the male beat her to it. The average size blue put on a great show for the family, but we would of liked to get the bigger one.
We worked that same area awhile with no more luck and decided to venture to the North grounds where I heard of good reports from my Father on the "Pamela". We ran up to the area he was fishing a saw some pretty good action almost immediately, catching 1 from about 5 bites in a couple hours. The fish were eating a little funny to get good hook ups but lots of fun to see great action.
Another good day fishing for the Mcloed's, good enough Mikes son Andrew wanted to fish one more day before they left.
Aloha, Capt. Teddy Hoogs
www.kilakilasportfishing.com
Posted by Bwana Sportfishing at 1:27 AM No comments: