On Tuesday, we hosted Mr. Dave Carver and his 14 year old son, Sam.  Both of which have been fishing in Kona before.  With a blue marlin release, and some Mahi Mahi action under their belt, they were ready to see what Josh and I could offer.
We decided to go north, after reviewing a recent temperature chart which showed a patch of warm water over the 1000 fathom curve.   After running for about 10 minutes, we set the pattern of lures not knowing what me may encounter.
We came across a small log floating on the surface at 8:00 a.m., and Sam picked off a resident 15# Mahi Mahi to start the morning off.
Groups of shearwaters were flying north to keep us thinking we were heading the right direction.  My Father Captain Peter Hoogs on the Pamela was also searching the North grounds, and came across a porpoise school just outside of us and called us over.  He was marking big tuna on his sounder, and missed one Ahi trolling shortly after he got in the school.  We picked the lures up, and ran his way, hoping to get in on the action.  Josh and I decided to put our green stick rig out and after working the school for about an hour we got bit.  14 year old Sam was in the chair again, this time with a nice big yellow-fin tuna which weighed 117#.
We sent Dave & Sam home with Mahi Mahi fillets, and smiles from a memorable day of fishing!  They're already checking the calender to see when they can get back to fish with us again!
Aloha, Capt. Teddy Hoogs
www.kilakilasportfishing.com 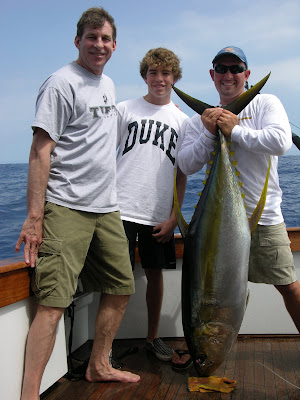 Posted by Bwana Sportfishing at 9:16 PM No comments: 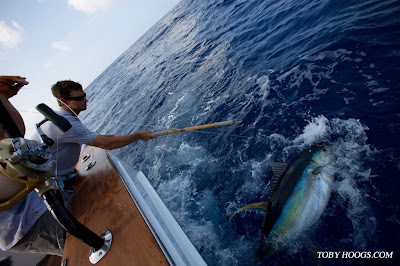 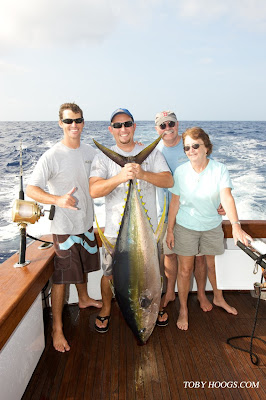 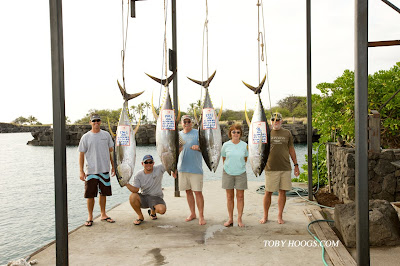 Posted by Bwana Sportfishing at 1:48 AM No comments: